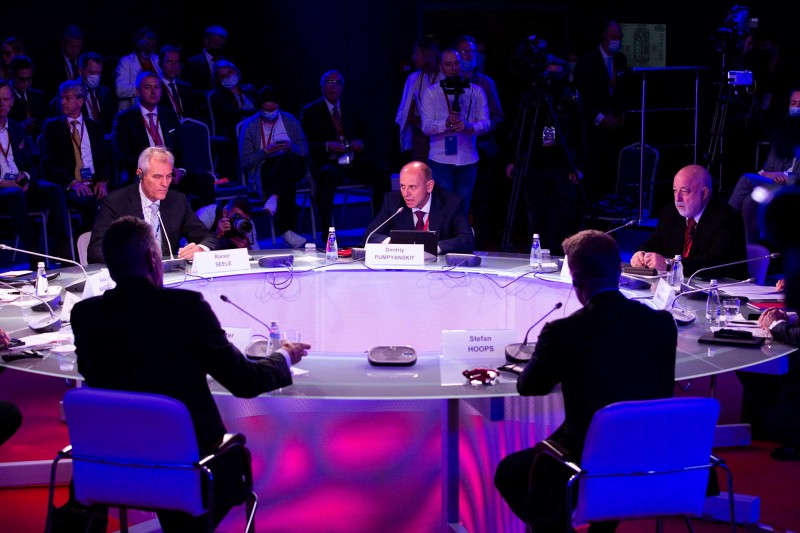 Dmitry Pumpyanskiy, Chairman of TMK’s Board of Directors and President of Sinara Group, told the St. Petersburg International Economic Forum (SPIEF 2021) that relations between Russian and German companies are trusting, with both sides striving to strengthen their cooperation and further develop new joint projects.

“Despite the turbulent political and economic landscape and all the challenges that come with it, relations between Russian and German businesses remain strong and trusting. We see a desire to strengthen this cooperation among both Russian and German businesses. Projects that are already underway remain on track, and new ideas and plans are emerging. We have managed to achieve long-term, successful cooperation thanks to mutual trust and responsibility to each other, our customers and suppliers,” explained Dmitry Pumpyanskiy at the Russia–Germany business dialogue session.

He also spoke about how TMK has modernized its enterprises using technologies and products developed by SMS group and other German companies. The company is currently undergoing a digital transformation leveraging products and solutions from the German companies SAP and PSI, two developers of integrated planning systems (IPS) and manufacturing execution systems (MES).

“We have much more than a purely business relationship. We also strive to promote ideas and digitalization. For example, in line with tradition, TMK and SAP will host the fifth International Metals and Mining Summit in Yekaterinburg this September. Furthermore, we are working closely with the German Eastern Business Association. We are chiefly talking about the activities of the Russian-German Council for Technical Regulation and Standardization for the Digital Economy. It is important for the economy and industry in Germany and Russia to speak the same language: by that I mean they should be working according to a single set of standards,” said Dmitry Pumpyanskiy.

He also paid a special tribute to Ural Locomotives’ tenth anniversary, which was celebrated in 2020: this is a joint venture between Sinara Group and Siemens building Lastochka high-speed electric trains, which are already in service across 60 regions of Russia. It is a Russian train: 82% of it consists of domestic components. Siemens has also produced a modern line of electric freight locomotives, which successfully operate on the Russian Railways network.

“We are now working with Russian Railways, Siemens and Ural Locomotives to implement a new, ambitious project: Sinara Group has signed an agreement to build a Russian high-speed train that travels at an average of 360 km/h and with a top speed of up to 400 km/h. This is a breakthrough project for the Russian economy, as well as the global one. We hope that the Moscow–St. Petersburg high-speed train project will be greenlit very shortly, and then everything that we are currently working on – train development and preparation for commercial production – will come into full force, meaning that we will be able to see this Russian high-speed train in service by 2028,” said Dmitry Pumpyanskiy.

Dmitry Pumpyanskiy sees the work of RSPP and the Russian Ministry of Construction, Housing and Utilities in construction regulation as effective and systematic