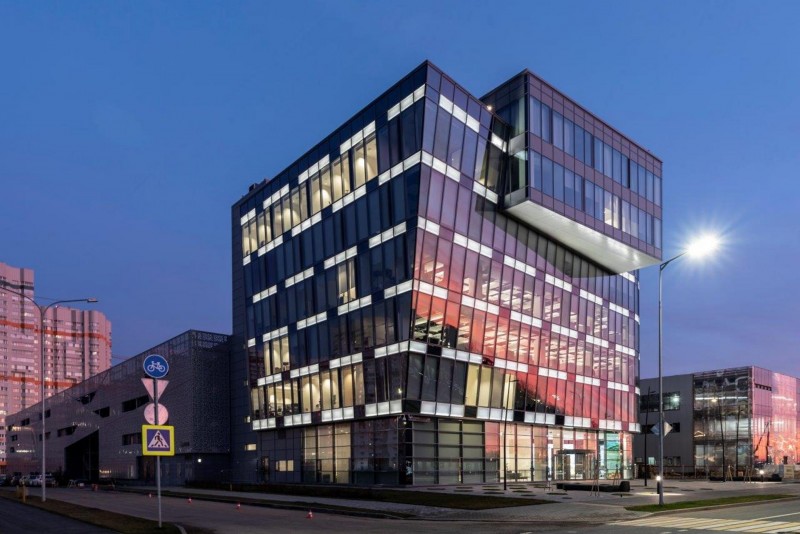 To date, TMK’s R&D facility is one of the few industrial and the only metallurgical facility in Russia to achieve the LEED Gold status. The building’s environmental performance was a key consideration throughout the design process: a digital twin was developed, with an energy use model as one of its components. All utility loads of the site’s future uses were included in the model, with equipment carefully selected and architectural and utility solutions optimized.

An automated lighting management system and a real-time technical energy metering system were implemented at the R&D facility. Special utility equipment and water-saving plumbing fixtures were installed to reduce water consumption. The building’s ventilation system features HEPA filters and airflow sensors, as well as a monitoring system to track ventilation parameters. The building’s exterior is covered with a reflective membrane to protect against overheating during the warm season.

“The development of green technologies is a key pillar of TMK’s investment program. We consistently improve the environmental performance of our operations, introduce advanced environmental technologies and thus improve the quality of life in the regions in which we operate. When designing our R&D facility in Skolkovo, environmental protection and minimized resource consumption were our primary considerations from the very start. The building uses approximately 25% less electricity and 45% less water than similar facilities. Advanced utility solutions have enabled us to significantly reduce the facility’s load on the Skolkovo Innovation Center’s infrastructure and reduce its GHG emissions by 480 tonnes per year,” said Igor Pyshmintsev, TMK’s Director for Research Development and Head of the R&D Facility.

TMK’s R&D facility in Skolkovo opened in autumn 2019. It features state-of-the-art equipment and is designed primarily for development, digital modeling, and complex testing of innovative materials, structures, and technologies. The facility operates four research laboratories to study the physical and chemical properties of metals and analyze metal condition and structure. It also houses a laboratory for mechanical testing of metal samples and Russia’s only integrated set of test benches to test new products – high-strength pipe connections for hard-to-reach hydrocarbon applications.

TMK qualified to supply line pipe to the Sakhalin-2 project

Igor Korytko: digitalization is a prerequisite for the successful growth of an industrial company